Public events and programs that promote awareness and appreciation of the arts.

The Castine Arts Association, located in Castine, Maine, is a non-profit, community-based volunteer group organized for the purpose of promoting awareness and appreciation of visual, literary and performing arts through sponsorship of public programs and events.

The CAA endeavors to focus public attention on the arts, to encourage the use of local art resources and services, and to encourage and receive grants, gifts, endowments and bequests to support and further the arts locally.

The Castine Arts Association was founded as a 501(c)3 organization in 1995 by Castine residents Lib O'Malley, Sue Loomis, Gregory Dunham, Peggy Rogers, and Vickie Sheridan who were interested in promoting the arts in Castine.

CAA was founded in 1995 and presented its first program in the spring of 1996, a lecture by author and critic Carl Little on The Art and Legacy of Winslow Homer.

The idea for CAA started with conversations between Lib O'Malley, a well-known Castine artist, and Sue Loomis of MMA's humanities department. MMA had recently acquired the impressive facilities at the BIW Center and was willing to share these facilities with the community. An open meeting was held for anyone interested in seeing the room and watching a demonstration of the audio-visual equipment.

Thanks to Lib's persistence, a small group began meeting to discuss ways to take advantage of all that was offered. Out of the many ideas that bounced around in those conversations, two basic principles emerged:
1) That Castine area was bursting with talented people and ardent supporters of the arts.
2) There was a need for more cultural events in Castine, especially in the winter.

with many others soon joining the ranks.

CAA developed by-laws and a mission statement that defines the group "as a community-based, volunteer group organized for the purpose of promoting awareness and appreciation of visual, literary and performing arts through sponsorship of public programs and events."

It stated that the group hoped to "recruit speakers and performers from away, but also recognize the resources on our doorstep."

Soprano Nancy Ogle recital of musical settings of poems, including a Philip Booth poem set to music by Arnold Berleant

The Choir of Trinity College

Castine Christmas programs – 27 years!!! – even before CAA was formed. Co-sponsored with Castine's 4 churches

"Music for a Spring Afternoon" with Sarah Schneider, Gerald Wheeler,

"An Afternoon of French Music" featuring musicians from The BSO, Sandy Warren sponsor.

Workshops in Speaking and Hearing Literature with Paul Gray

"The Sky's the Limit" poetry exhibit at art exhibit

"Ekphrastic is Back a Bit"

"Much Ado About Nothing" Shakespeare troupe performance

Creative Writing Group formed – has been going on for years

"Highlights from The Fort" (book by Bernard Cornwell) presentation

"Twelfth Night" by No Holds Barred

"Castine in So Many Words" presentation at Annual Meeting

"Here's Lookin' at You, Castine" presentation of slides and readings

"A Panoply of Castine Poets"

"Mr. Preble Gets Rid of His Wife" Thurber skit at Annual Meeting, 2019

"The Sky's the Limit" poetry exhibit at art exhibit

Ornament making workshop – many used on the town tree

Exhibits of Wilma Rifkin and Judy Payne at BIW

Fine Crafts Sale in conjunction with the Bagaduce Quilter's Guild

"The Sky's the Limit" art exhibit at Emerson Hall

"The Artist as Witness" drawing class with Bruce Bulger

"Features of the Face" drawing class with Rob Shetterly

"Down to Earth" art exhibit at Emerson Hall

"Techniques for Painting with Pastels" with Pam Cabanas

"Painting the Still Life in Abstraction" with Louise Bourne

"Self Portraits" with Rob Shetterly

"Play with Clay" with Solveig Cox and Bev Bishop

Presentation of the Art & Craft of our Members at Annual Meeting

"Painting a Still Life in Oils" with Ed Gummel

Potluck and a Movie Night, winter schedule, at Emerson Hall. Audio visual system donated to the town by CAA.

"The Art of Wood - Paddles" - Don Small and David Wyman at Highlands Woodturning.

"A Visit to the Louvre," multi-media presentation

"An Evening with Rembrandt", multi-media presentation

"The Wyeth Family in Maine" by Farnsworth Director, Christopher B. Crosman

"From Bed to Wall: The Art Quilt Movement Today" by artist, Elizabeth Busch

"The Light of Edward Hopper" by Robert Shetterly

"Art of the Maine Islands" by Carl Little

"Bernice Abbott: A View of the 20th Century" by Karen Sheldon

"From Homer to Hartley: Painting in Gloucester from 1870-1935" by James McAllister

"M.C. Richards: The Fire Within"

"An Artist's Look at Korea" by Gretchen Raber

"From Farm to Table – Cooking with Local Foods" with Tom Gutow

French and French Colonial Potluck at the Manor Inn

Food in Film potluck with Harry Kaiserian at the Manor Inn

"The Art of Cooking" with Diane Bianco

"The Art of Cooking" at Aragosta with Devin Finnegan 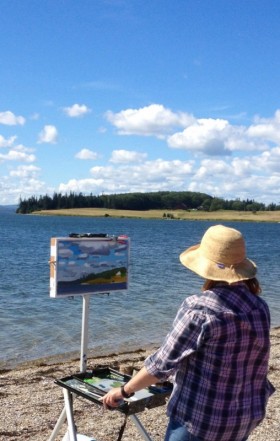